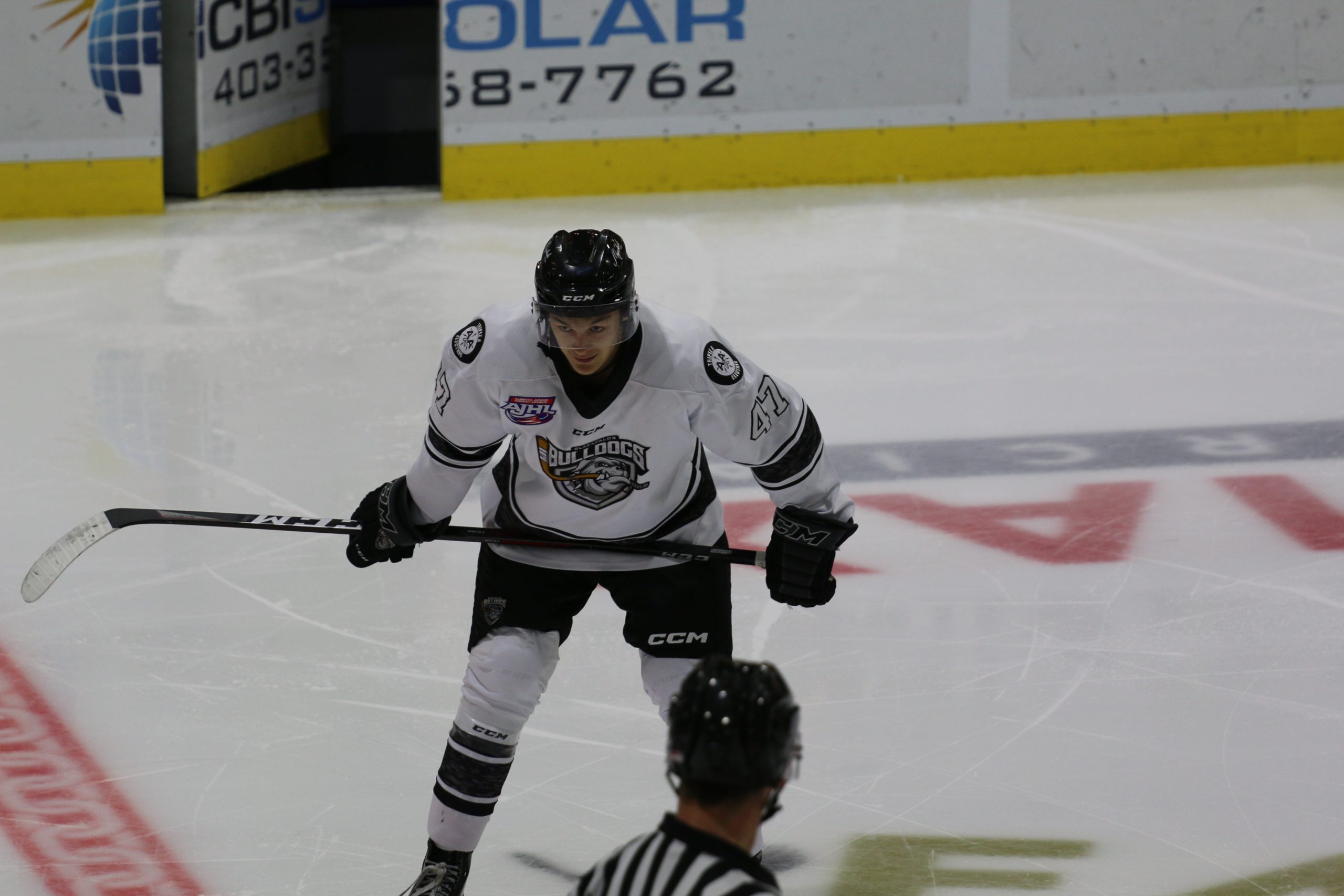 Tuesday night in Camrose marked a real four-point game in the top half of the South division, with the 9-4-1 Camrose Kodiaks hosting the 8-4-1 Blackfalds Bulldogs. For Camrose, a regulation win would put them four points clear of Blackfalds, and just two points behind the Brooks Bandits in first place. Blackfalds had an opportunity to tie the Kodiaks in points and move ahead of them in the standings thanks to their game in hand. Blackfalds had hosted Camrose twice already on the season, with the Kodiaks taking wins in both games, first in Blackfalds’ season opener, and the second last Monday, with Cooper Sharp scoring in overtime to complete a Camrose comeback. Camrose elected to start the 7-1-1 Robert Andreakos, who beat Blackfalds twice already this season. Blackfalds continued their trend of rotating the starting goaltender, with Charlie Zolin taking over the crease after Matthew Hennessey’s overtime win on Saturday.

An early short-side wrist shot by Carson Whyte opened the scoring for the Camrose Kodiaks after Ryan Sullivan had forced a turnover down low. At the end of the first period, Noah Alvarez took a smart pass from Levi Green and snapped a powerplay goal through the legs of Charlie Zolin to give the Kodiaks the lead. Through 40 minutes of play, neither team was able to establish much control during the game. Blackfalds, however, was getting their fair share of chances off the rush, but as had been the case in the first two meetings between these two teams, Robert Andreakos had an answer again and again for Camrose.

Early in the third period, Owen Dean took a sharp-angle shot toward the goal that took an unfortunate bounce off Charlie Zolin before looping up over Zolin’s head and into the back of the net. However, Brett Meerman would finally find a hole through Andreakos just four minutes later, as his one-timer on the powerplay cut the Kodiaks lead down to 3-1. Blackfalds threw everything they could at Andreakos’ net, and until the final minute, couldn’t get anything past him. With exactly one minute to go in the third period, Jason Siedem found Keanu Krenn with a tape-to-tape 100-foot stretch pass, springing Krenn on a breakaway. Krenn was tripped on the way to goal, but as he was falling to the ice, he still managed to get a shot away, hitting the post, but the referee saw enough to award a penalty shot. Krenn would pick the top corner with a perfect shot on the ensuing penalty shot, giving Blackfalds one full minute to find a tying goal. It ultimately came up short, as Andreakos kept out anything Blackfalds could muster toward his goal.

Blackfalds fall to the Kodiaks for a third straight time, snapping their three-game winning streak in the process. Blackfalds plays in Drayton Valley Friday and Lloydminster Sunday before playing Olds at home next Tuesday.