Only a few days removed from hosting the 2022 Alberta Junior Hockey League Showcase, a more regular pace offers a rare chance for reflection for those who helped plan and carry out the successful event. Especially for Bulldogs team owners, Doug and Jodie Quinn.

This year, many eyes in the hockey world were glued to the Eagle Builders Centre in Blackfalds, AB, the home of the Bulldogs, for the AJHL Showcase. This annual weekend sees all 16 teams gather to play regular season games in front of a gallery of professional scouts and college recruiters. Shortly after completing their inaugural season with the expansion Bulldogs in 2021-22, team owners and visionaries, Doug and Jodie Quinn, quickly jumped at the chance to host the premiere, and somewhat Herculean, hockey event.

The weekend didn’t just feature hockey either. Live music and family friendly activities were offered throughout the weekend, while fans also enjoyed in-game prizes and exclusive dressing room tours. Sportsnet The Fan 960 even stopped by to cover the event on Saturday night, as the Bulldogs took on the Whitecourt Wolverines, with the host team skating to a thrilling 6-2 win. The overall reviews have been positive, at times glowing, as the event came and went with great success. 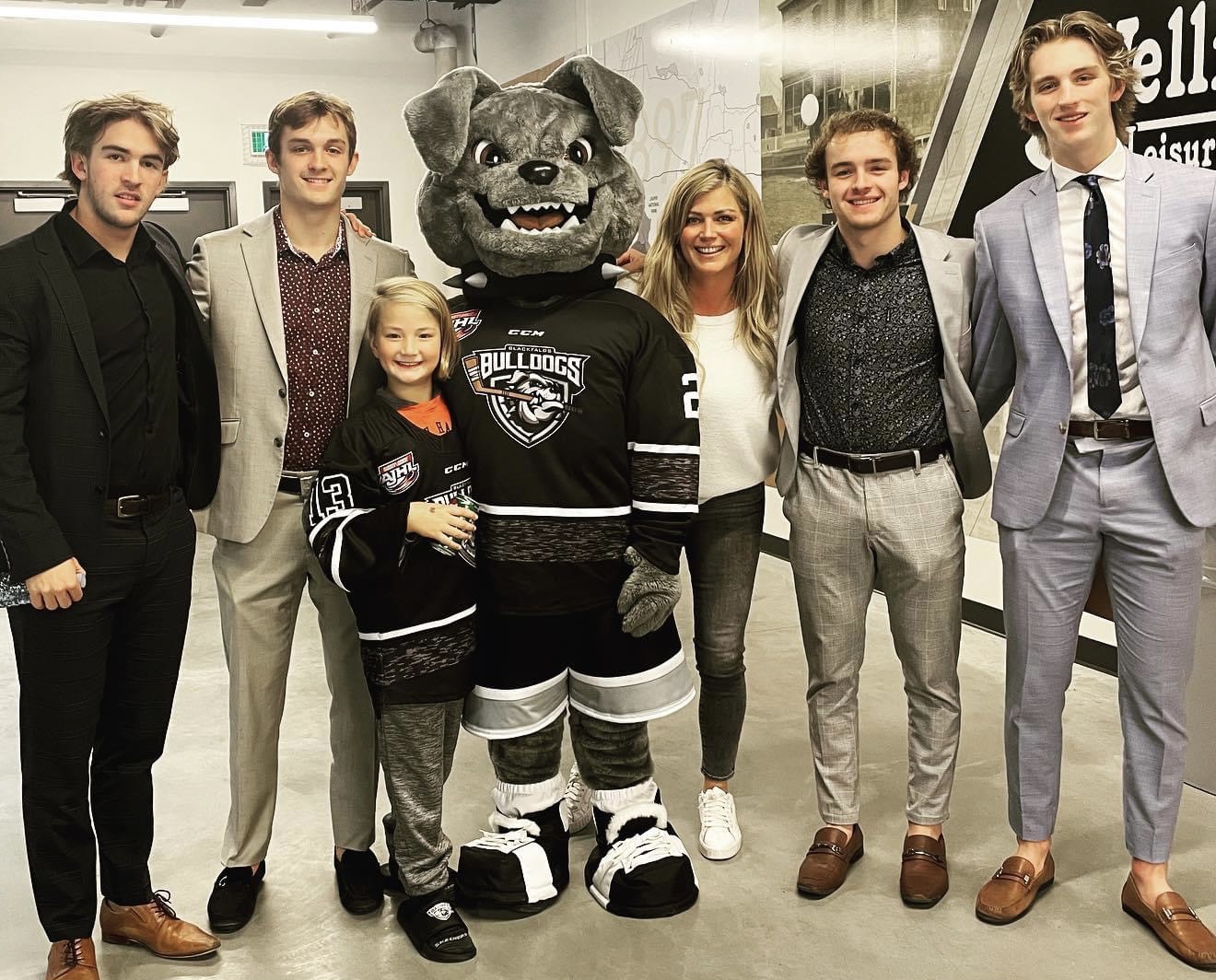 Taking a moment to reflect on the weekend, Jodie Quinn, admits she felt a range of emotions, but found a sense of deep satisfaction witnessing her team of organizers, staff, players, volunteers, friends and family come together to achieve a common goal.

“I love how this became not only a community event, but a Bulldogs Family affair, with many of the team’s families wanting to be involved,” expressed Quinn. “From being the mascot, puck boys, putting together packages and tickets, or sorting inventory, it was cool to have all the kids wanting to be involved. I love that our employee’s families have the same passion for our team and our organization as we do.”

“I also want to send a huge thank you to all our friends and family who came to our games, especially all the ones from out of town. They came out, cheering on the team in all their Bulldogs and Showcase attire,” Quinn revealed. “Sometimes, getting lost in the grind and having my husband on the bench, it’s awesome to enjoy the Bulldogs games with friends and family. It was nice to share all that we have built with our loved ones. I was truly touched.”

Taking the team from an inaugural, expansion year to being the host team of the AJHL Showcase has been a quick progression and Jodie Quinn alluded to the importance of always learning and growing just to keep pace.

“It has been a very eventful year, I mean we are still learning from last year. There were things where we sat back and looked at and realized, we need to be better, so we went back to the drawing board,” Quinn explained. “We could have stayed with our certain processes or systems, but overall we knew, in order for us to be better, we need to find alternative solutions.”

Hockey is ultimately a team sport on the ice, but it is also a team sport off of it, especially when it comes to event planning. This year’s team of organizers was assembled early and began the rigorous planning of the event months in advance of the actual Showcase.

“Bringing on Showcase organizer Trevor Thomas, who’s done World Junior Championships, he was the best asset that we could have asked for,” Quinn expressed. “With assistant GM Adam West being right there as his co-pilot and Charla (Flett) from the league, having them provide that template and always being there to support us was huge, because this was our first big hockey show.”

Owner and head coach, Doug Quinn, had his primary focus on his team during the weekend, as they still had two regular season games to play. With professional and NCAA scouts in the stands, there was inherent pressure applied to each game and the young players were not immune to feeling some nerves. For coach Quinn, the message to his team was simple.

“I think for us as coaches, we have to recognize and communicate to the kids; yes it’s a big event, but we still need to play within a team structure. I found that some of the kids were trying to do too much, but once the nerves settled a bit and they realized they just needed to play their game, I think they did a good job of that.”

The Bulldogs won both their games (2-0-0) against the Grande Prairie Storm and the Whitecourt Wolverines, which afforded some time during the weekend for Quinn to watch some additional hockey games, mingle with colleagues and take in the electric atmosphere. Overall, he was very pleased with what he saw.

“It was a great effort by everybody. With Jodie, Trevor, Michelle (Brown), Adam and the Bulldogs organization, they all did a great job,” expressed Quinn. “I went to a number of games and the crowds looked good, and to get that support from the community of Blackfalds and the town council, it was great. I was very happy and felt really good with what I saw. I thought our whole team put the effort in and it was run very well and was a great event.”

Making a grand impression during the event was the facility itself, the Eagle Builders Centre (E.B.C.). The brand new arena was often the talking point for many scouts, fans and players alike who, over the four-day event, became enamoured with the sight lines, the in-game atmosphere and all the amenities that the arena had to offer. Games were held on two ice surfaces during the Showcase, which made it convenient for scouts to take in as many games as they could. It also allowed fans to easily drift between both arenas; or get a massage, or check out the public library attached to the lobby, or shop for merchandise at the team store. If there were any questions heading into the weekend as to the facilities’ abilities, there certainly remains no doubt that the E.B.C. is a perfectly suited destination for hosting large-scale events like this in the future. Doug Quinn hopes that is the case.

“Once I recognized what the Town of Blackfalds was building for an arena, I wanted to be a part of it,” he explained. “We made the investment into the building with the VIP area, the press box and jumbotron and it really was done with the intention to host other showcases and large-scale hockey events. We certainly have the group to continue to put on these high-end events and yes, it’s something we are definitely looking forward to doing in the future.”

Doug and Jodie Quinn would like to thank everyone involved in bringing the 2022 AJHL Showcase to Blackfalds, from the volunteers, staff, scouts, players, fans and the local community partners that helped make this dream a reality.

(In no particular order:)