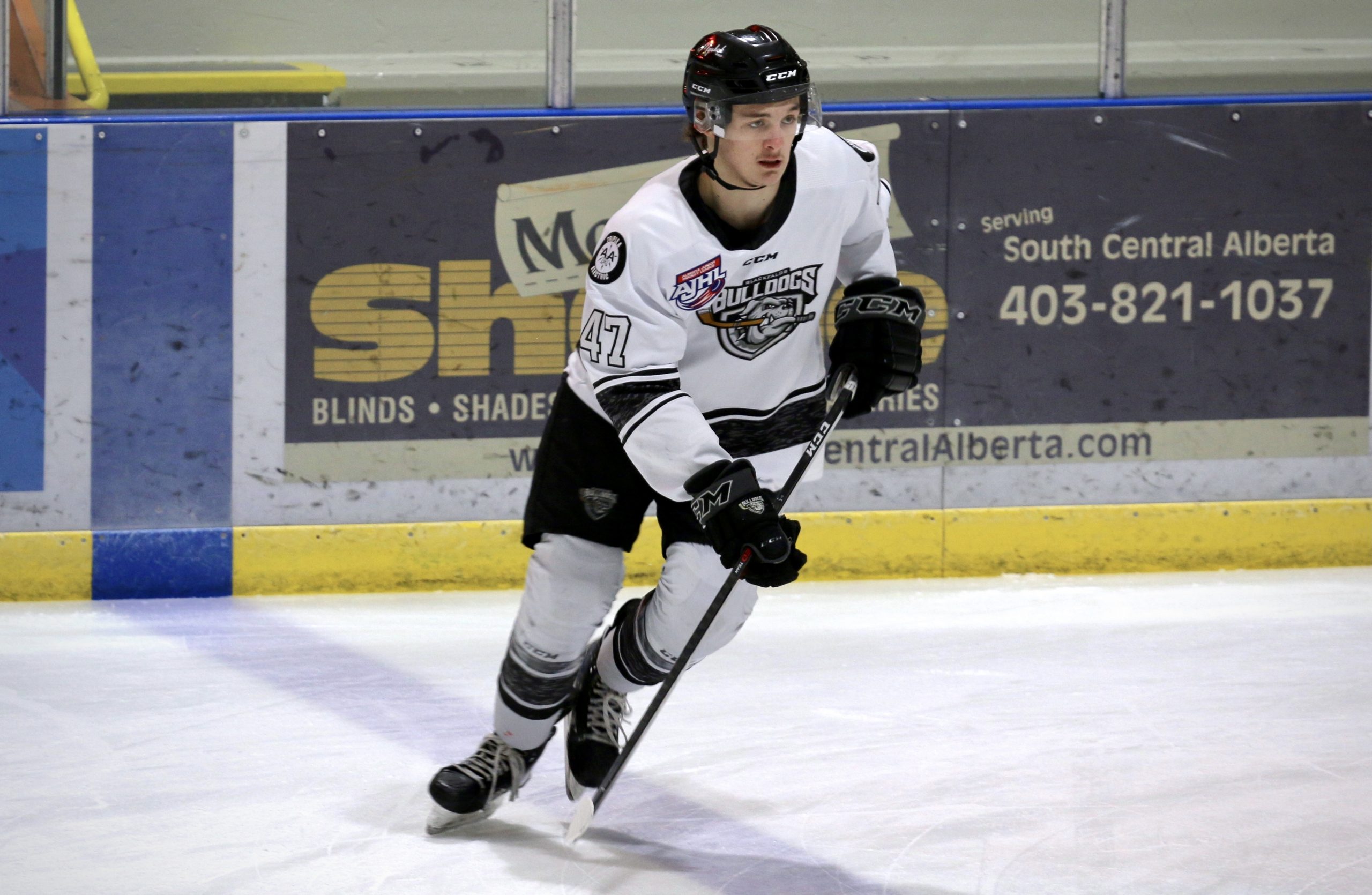 If one statement rings true, it’s that every hockey team needs a bit of grit (or a lot) in their lineup to be competitive. Scouts are on the constant lookout for players that can provide tenacity in the trenches during a sixty-minute game. Forward, Spencer Bell, brings all that and more to the lineup each night for the Blackfalds Bulldogs.

The 18-year-old from Warman, SK appeared in 54 games for the Bulldogs during their inaugural season in 2021-22, which was also his first season in the Alberta Junior Hockey League (AJHL). As a self-described ‘hard worker’ Bell has demonstrated an ability to impact the game physically, while staying focused on playing a solid 200-ft game, with an ability to contribute offense at a consistent clip. Bell previously averaged over a point-per-game (1.11 P/G) during his last two seasons of U18 AAA playing for the Swift Current Legionnaires and the Saskatoon Blazers (SMAAAHL).

Bell’s work ethic and physicality were on full display on January 2, 2022 during a game against the Camrose Kodiaks. Shortly after a face-off at centre ice, Bell finished his body check along the boards with thunderous authority; the resulting impact sending a shower of shattered glass to the ice, leaving his opponent sitting dumbfounded on top of the timekeeper’s desk. It was quite the sight and it was certainly a hit that Bell had never witnessed before, let alone orchestrated.

“I’ve done nothing like that before, that was crazy, it honestly just shocked me when I saw it,” admitted Bell.

As a rookie, Bell revealed he has had to constantly adapt to the size and speed of his opponents in the AJHL, but believes that his work ethic is what has allowed him to make a tangible impact on the physical aspects of his game in his first season.

“I think I can bring a bigger body out there, I can play any role. I can get in the corners and play physical and play a hard game. I’m a hard worker,” explains Bell with a grin.

However, he added, perhaps the biggest area of growth this season has been the mental side of his game.

“The AJHL is definitely a much tougher league than AAA,” Bell revealed. “There’s a lot less time and space, so I have definitely become a quicker thinker and I think that’s how I’ve adapted so far.”

When asked to reflect back on his hockey journey and on those who have helped him get to this point in his career, Bell expressed gratitude for his parents who devoted so much time, effort and resources to help him achieve his hockey dreams.

“My parents have obviously been a big factor in my hockey career,” Bell expressed. “They’ve brought me to all my games and practices, signed me up for extra skating and working out and I owe it all to them. They are the ones who have put me here and allowed me to do this.”

Off the ice, Bell has spent time helping out at the local schools, as well as volunteering at the food-bank throughout the season. On the ice, he registered 34 points (14G, 20A) in 54 games and added 74 penalty-minutes (PIM) in his rookie season and was awarded the ‘Working Champion Award’ by his team for his efforts.