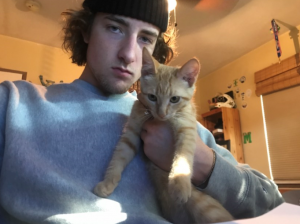 Hailing from Claremont, California, Lucas Massie hopes to be a difference-maker between the pipes for the Blackfalds Bulldogs in 2021-22.

The 18-year-old, along with Bulldogs and Anaheim Jr. Ducks teammate Jackson Ferry, is coming off an actual hockey season having played more than 20 games.

In 18U AAA play, Massie maintained a 1.71 GAA and .935 SV% over the course of 21 games, en route to a Pacific District title and appearance in the national championship in St. Louis.

“I was just glad we were able to play. Winning Districts was huge for me because I’d won the year before with the LA Jr. Kings but couldn’t go to Nationals because they were cancelled by COVID,” Massie says.

“I really feel like I developed this past year, especially mentally. As far as my routines, pre-game, cool down, and taking care of my body, that’s something I’m focusing on this next year. It’s going to be a demanding schedule — I know junior hockey is pretty demanding — so learning how to stay strong mentally and take care of my body is big.”

Massie has previously played in the Brick Invitational in Edmonton, as well as in tournaments in Quebec and Ottawa.

He’s excited to explore Alberta, outside of West Edmonton Mall, he jokes.

“For me, the huge reason for choosing Blackfalds is the coaching staff. Talking to ‘Westy’ (Assistant GM Adam West) and Al Parada (Director of Hockey Operations), they really made me feel welcome,” he says. “Obviously everything else that comes with it is great, like the arena, the town, and I heard Blackfalds is a great town for animal lovers.”

For Massie, that’s a huge plus as the 6’1” netminder lists veterinary studies as one route he’d like to potentially pursue in post-secondary.

“I have two dogs, one Jack Russell and a German Shepherd; their names are Finn and Bailey. We also have a cat that just showed up in our yard one day, and his name is Sosa, but not for the baseball player,” he shares. “I love animals, and I also enjoy computer programming. That’s mostly a hobby right now, but I’ve considered majoring in that area in college too.”

On the ice, Massie fancies himself an above average skater who plays a patient style. He can be aggressive, however, when called for.

As for NHLers, his favourite is José Théodore, which is where Massie’s #60 comes from, and he’s partial to the Detroit Red Wings.

“My dad got me into the sport; roller hockey is pretty big out here, so that’s where I got started, but I skated on an ice rink for the first time not long after. I always just loved the goalie gear and I thought Theodore’s set-up was sweet when he was with the Capitals,” says Massie.

“Roller is a lot harder to move around as a goalie. You have to pick up your feet and be a lot more dynamic, which has maybe helped me with the scramble part of my game — not really technique-wise, but making a save at all costs.”

Massie has been part of multiple winning squads at the world-renowned North American Roller Hockey Championships (NARCh), including in 2019 when his team ‘Bo Dangles’ captured the 18U Platinum division championship.

“The NHL is obviously my end goal. I want to play professional hockey and that’s the dream, but what I try to do is not look too far ahead,” Massie says. “I’m looking forward to getting better this summer and coming up to win in Blackfalds.”