Hey Bulldogs fans, this is just the first in a series of player profiles we’re bringing you ahead of the team’s inaugural AJHL season so you can get to know our fantastic players that much better. We hope you come back regularly for these and our other latest stories about what’s going on with the Blackfalds Bulldogs. 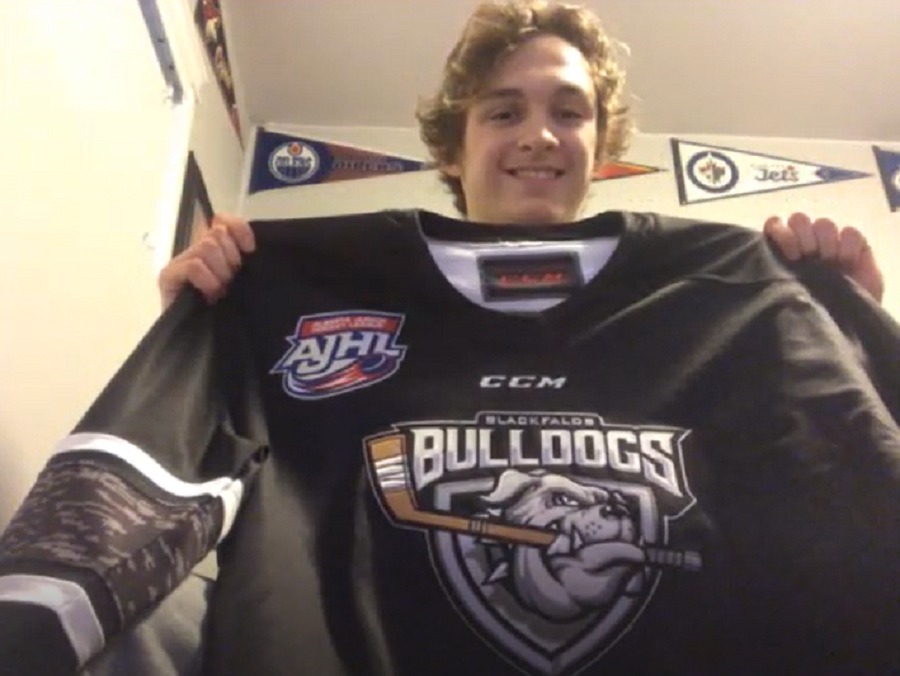 He will be one of the players fans see in black, white and grey at the Eagle Builders Centre when the Blackfalds Bulldogs take to the ice for their first AJHL season in September 2021.

“I’m gritty, I like playing physical, and I have decent hockey IQ,” says Bell, who played minor hockey in Warman, Saskatchewan, which according to the 2016 Federal census, was the fastest growing municipality in the country between 2011 and 2016, at 55 per cent growth. The city is home to more than 11,000 people.

Coincidentally, Blackfalds has also become known for its rapid growth, and was second behind Warman for greatest rise in population (48 per cent) from 2011-2016.

“I want to see how we can grow as a new franchise,” says Bell, who won’t turn 18 until Oct. 4. “I had other opportunities in the SJHL and AJHL, but from the facility to the things they were offering on and off-ice, and the schooling opportunities I think I’ll have, that’s why Blackfalds is where I chose to be.”

A right-handed shot who’s rotated between centre and wing since Peewee, Bell admits he’s never been to Blackfalds, but did play in a tournament in Red Deer when he was much younger.

“I think I have a pretty good shot too. I like coming down my off-wing and letting a snap shot go,” he says confidently. “If I can get good wood on those, they can be lethal.”

Bell has played hockey in recent months, though not since November when his Saskatoon Blazers got in four games to start a COVID-shortened SMAAAHL season. Gangbusters out of the gate, Bell notched five goals and four assists to lead the Blazers in each category, as well as in penalty minutes with 14.

With the last game played over two months ago, however, it’s been a winter unlike any other.

“It feels like the offseason. We only have eight-person skates right now, and it doesn’t feel like I’m practicing for anything. We’re just out there,” says Bell, who also had 41 points (17G, 24A) in 41 games for the league’s Swift Current Legionnaires last season. “I’ve been working out at the gym a little bit too.”

Working out, hanging with the boys, and gaming are the most likely activities the 6’0”, 170 pound grade 12 student is doing when not at the rink.

His favourite things include playing Xbox One, eating lasagna, watching Lucifer and listening to Iann Dior.

As for special talents, he admits, “That’s a tough question. If you’ve ever seen the guys who spin the puck on their stick sideways, I can do that. I’ve been practicing a lot lately.”

Speaking of friends, there’ll be at least one familiar face for Bell once players arrive in central Alberta. Current Blazers teammate Braxton Buckberger has also signed with the Bulldogs.

Bell has a 14-year-old volleyball-playing sister, and as for his parents, they had a little something to do with his love for hockey.

“They’ve been my motivation. My dad makes sure I’m getting proper meals and treating myself right,” he says. “I don’t know if I remember my first time with a hockey stick, but he got me into it and has always been hard on me to do better, whether it was with biking or working out.”

“He has worked hard and been a bit of an underdog, not getting drafted by a SJHL or WHL team,” parents Keith and Rhonda say. “He never let that bother him and he just worked harder and pushed himself more to be seen by the people he wanted to be seen by. His determination and hard work paid off.”

Mom and Dad say that like many Canadian families, their basement’s walls were trashed from endless games of mini sticks, adding Spencer occasionally donned goalie gear for Keith to shoot on him.

“Every time Spencer would leave for a game, Keith would say ‘work hard’ and I would quickly add in ‘have fun,’” Rhonda recalls. “We hope he continues to always strive to do the best he can in everything he does.”

A fan of Artemi Panarin and the New York Rangers, Bell hopes opportunities may arise to play in the NCAA. Asked what he’d study, engineering, business and architecture top the list. Europe and the NHL are also avenues he has eyes on.

“The best part of my game is how I battle. I’m maybe not the biggest guy, but I’m strong enough. I know how to win a battle. But my skating is where I need to improve; I want to be a faster and stronger skater overall,” says Bell.

“I also like to joke around a lot. I’m kind and I’m a pretty good guy, but I like the funny aspect of life. I do try to bring that to the ice, but when I have to be serious, I dial it in.

“I know the AJHL is a competitive league, and it’s nothing short of or below any other league,” Bell adds. “If anything, it’s above and that’s also a reason why I wanted to come to Blackfalds, because this is an amazing league.”